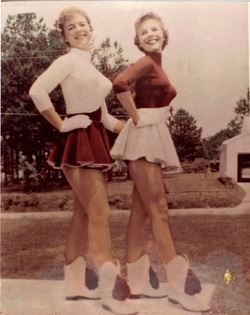 Our first and second captains Helen and Frances Molan
When John T. Finley became JSU’s band director, he immediately brought new ideas to the band. This included major changes to the instrumentation and marching style. But he also had some strong (and radical for the time) opinions about visual auxiliary units. Finley did not want to follow the normal trend of having a large line of majorettes. He was not against baton twirlers; in fact, the band featured two or three “feature twirlers” well into the 1970s. However, he did not think large majorette lines were visually effective. He wanted precision, and he felt that the more majorettes you put on the field, the less precise their performance became.

Finley was aware of a small handful of colleges that had replaced their majorette lines with precision dance lines. Additionally, he looked to the Rockettes of Radio City Music Hall for inspiration. He wanted to bring the “show potential” of a large, highly skilled, Rockettes-style kickline to Jacksonville. Finley himself picked the name for his new dance line: the Marching Ballerinas. Trombone player Norman Padgett suggested a name for the band, and together, the units took the field that fall as the “Southerners and Marching Ballerinas.” The dance line at Jacksonville State was the fourth of its kind in the United States, following two Texas lines, the Kilgore College Rangerettes (formed in 1940) and Tyler Junior College Apache Belles (1947), and the Southern Mississippi Dixie Darlings (1954).

The first choreographer of the Marching Ballerinas was Zenobia King Hill. Working with Hill, Finley developed a training system for the Marching Balleri­nas. Girls wishing to audition for the dance line first had to complete a spring training class, where the basic techniques were taught. Once the final cut was made, the girls immediately began working on routines for the following fall.

Finley put an emphasis on student leadership, with his students taking an active role in the instruction of the Southerners and Marching Ballerinas. The first Ballerina captain (later known as Head Ballerina) was Helen Molan, followed by her sister Frances. Thus, began a line of talented student leaders that continues today.

In the early years, the Ballerina feature came near the end of the halftime show. Music for their dance was provided by a small group of band members, rather than the entire Southerners. The style of dance was much the same as the “traditional” style still used by the Ballerinas. The Ballerinas also participated in the crowd-pleasing precision “silent drill.”

The first Ballerina uniform, designed by Dr. Mason, was made to match the band's uniform and was worn for two seasons. The next uniform (seen in the photo above left) was designed by captain Helen Molan and was scandalous for the time, as it was made tight to the body with a short skirt. The third uniform, designed by second captain Frances Molan, added a vest to the previous and has been the standard of which the traditional uniform has been based off of since 1959.  There have been many variations to the uniform over the years, known by such names as the “V-neck,” the “Baby Doll,” and three-pleat and sixteen-pleat skirts. Today's line wears a version of the "Santa" suit which was named such because the Ballerinas looked like "Santa's little helpers." But the boots and tassels have been worn since the very first line and haven’t changed in more than fifty years. In the early years, Ballerinas would mix Jergen’s lotion with iodine or ink to paint on their legs for a “tanned” look. Later lines would use self-tanner and modern lines wear tights for uniform legs.

After Walter Mason’s sudden death of a heart attack in March 1959, Finley took a leave of absence to complete his doctorate and assume duties as Jacksonville State’s music department head. In 1961, David L. Walters, a native of Youngstown, Ohio, was hired as the new director of the Southerners and Marching Ballerinas.

Walters was a gifted arranger, and he used these skills to the fullest when it came to the Ballerinas. By the late 1960s, such Walter’s arrangements as “Satin Doll,” “Lulu’s Back in Town” and of course “The Quilting Party” had become beloved standards in the Ballerinas’ repertoire. Under Walters, the Southerners and Marching Ballerinas flourished. They routinely made appearances in local and regional parades, professional football games and high school band exhibitions. In 1965, they performed in the inaugural parade of President Lyndon B. Johnson and in 1976 they marched in America’s Bicentennials parade.

Under the direction of Kenneth Bodiford since 1994, the Ballerinas have become increasingly more integrated in the band’s overall show design. In addition to being spotlighted in one song in the middle of the show, the Ballerinas are now featured throughout the performance, using modern dance (including ballet and jazz), costumes and joining the colorguard in dramatic flagwork to paint a stunning visual portrait. The transition to the modern era a Ballerinas began in 1999. Due to lower audition numbers and the need to match the innovation of the Marching Southerners, a style combining jazz and other dance techniques was added to the Ballerinas' repertoire. The change came with both support and push back. The Ballerinas of the early 2000’s were trailblazers for the lines to follow, just as the very first lines were. It was through years determined that the two equally-loved styles would be separate. This preserves the traditional style and allows for flexibility in exhibition shows. Since these years, the Ballerinas have continued to amaze the crowd with the level of difficulty in their performance. The modern lines now must learn and perfect two completely different styles of dance.

Combined with the powerful sounds of the Marching Southerners, the Ballerinas have brought cheering audiences to their feet at exhibitions across the Southeast, at B.O.A. Grand Nationals in Indianapolis, and in the streets of New York City, home of the Rockettes and even London, England and Rome, Italy; and every fall, in parades and at football games, the Ballerinas don their traditional uniforms and tasseled boots to thrill the crowds once again with beautiful smiles, precise “head pops” and spectacular kicks, paying tribute to that original line in 1956 and to all the lovely ladies that have followed. Ballerinas are a mixture of tradition and innovation. We continually raise the bar higher while honoring our past. Remember our quote--